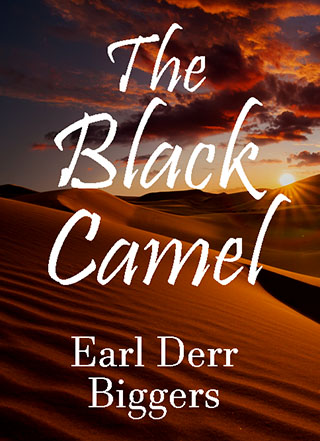 Description: The story of a Hollywood star who is stopping in Hawaii after she finished shooting a film on location in Tahiti. She is murdered in the pavilion of her rental house in Waikiki during her stay. The story behind her murder is linked with the three-year-old murder of another Hollywood actor and also connected with an enigmatic psycho. Chan, a detective from the Honolulu Police Department, investigates amid public clamor demanding that the murderer be found and punished immediately. “Death is a black camel that kneels unbidden at every gate. Tonight black camel has knelt here”, Chan tells the suspects.

Earl Derr Biggers (1884-1933) was an American writer and playwright. He studied literature at Harvard University, was interested in the work of R. Kipling and R. Harding.

After graduating from the university in 1907, Biggers worked briefly in Cleveland as a journalist. In 1908, he went to work for the Boston newspaper The Boston Traveler, where he wrote a daily humor column and a theater review column.

In 1912, he moved to New York with the script of the first novel, “Seven Keys to Baldpate”. In New York, Biggers worked briefly as a journalist, then switched to playwriting, in which he achieved some success. His plays have been staged on Broadway and abroad. Based on the novel “Seven Keys to Bald Mountain” (1913), 7 films were made under the same name and 2 based on them.

In 1919, Biggers moved to Pasadena, California, due to failing health and a desire to be more involved in film adaptations of his works.

While visiting Honolulu (Hawaii), he got acquainted with the activities of the local policeman of Chinese origin – Chan Apan, who became the prototype of his most famous hero – Charlie Chan. The first Chan novel, “House Without a Key”, was published in 1925. Charlie Chan’s professionalism has made him one of America’s most popular literary heroes.

On April 5, 1933, Earl Biggers died suddenly of a heart attack in a Pasadena hospital.

This book is available in digital format only. You will receive the book file to your email after transferring the payment